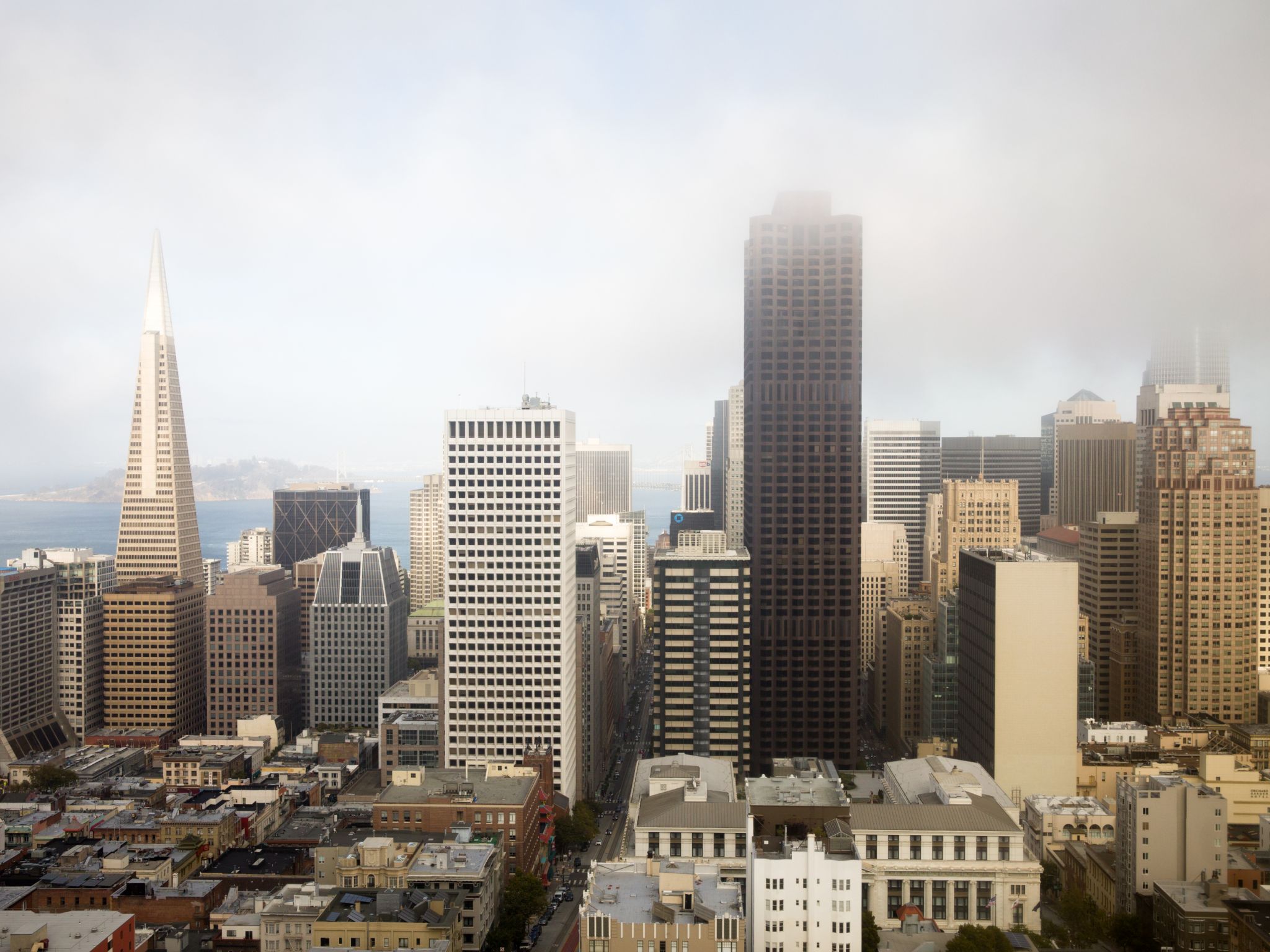 Taking in the dizzying views over San Francisco from the northwest windows of the Top of the Mark, it’s hard to believe this corner is steeped in tragedy.

Below, the red stone James C. Flood Mansion and Grace Cathedral watch over dog walkers in Huntington Park. Between the skyscrapers of Russian Hill, the waters of the bay to Alcatraz and Angel Island peek across, and the Golden Gate Bridge and the ocean beyond.

Years ago, instead of tourists and business travelers taking the scenic view on their phones, loved ones would gather there to get a final glimpse of the battleships of soldiers going into battle, which won around the corner from the legendary bar called “Weepers’ Corner”. “

During World War II, San Francisco was the largest port on the West Coast, and the newly opened Top of the Mark has grown from what Life magazine has described as “the exclusive nightlife rendezvous of the society of San Francisco cafes “to the last of a military bound for the Pacific. port of call.

A 1944 Time magazine article wrote that as many as 30,000 soldiers and sailors climbed the elevator each month for a nightcap on American soil. Wrapped up to the rafters, the swing group performed as the couples danced. The military toasted Golden Gate thinking it would bring them luck, praying it wasn’t their last martini.

“A lot of ships were leaving from Treasure Island. The officers would leave a bottle for the rest of the squadron to return from duty, ”Jaap Boelens, manager of the InterContinental Hotel Mark Hopkins, told me over a dirty vodka martini. As is often the case on the 19th floor, the view distracts us. “It’s emblematic. It really is a very beautiful city, ”he says. “The sunset is different almost every time, with the fog setting in. It feels timeless.”

The bottle ritual looked like this: Military returning from battle could claim a free bottle of bourbon behind the bar. Once they signed a note and attached it, their squadron could drink it for free if and when they returned as well.

The only catch was that the last officer to take a sip had to buy the next bottle. The tradition has acted as an unofficial means of documenting those who have returned from the war and honoring those who have not.

“At that time, everyone was going to Japan for the expected big battle, or they had just returned from a big battle like Iwo Jima or Okinawa,” said the veteran. TJ Chapman told his grandson Boston Globe writer Keith Chapman. “Either you drank to celebrate that you weren’t killed or you drank to forget you could. ”

The Mark Hopkins Hotel was built on the imprint of its namesake’s Victorian fairy castle from a house that was destroyed in the 1906 earthquake. The hotel built in honor of the Railroad Baron became a sensation in 1939 when owner George D. Smith chose to tear down all the walls of the 19th-floor penthouse suite and transform it into a glass-walled lounge bar with 360-degree city views.

Seven decades after being a wartime icon, the hotel has helped the city through more difficult times as luxury rooms filled with first responders at the start of the coronavirus pandemic.

“It was interesting. I had never closed a hotel before,” Boelens says. “It was high stress, high anxiety. There was a lot of uncertainty in the world. It became very calm. in the streets We didn’t know how long it was going to last.

The contract with the city saw Muni drivers, police, firefighters and hospital workers on daily trips using the hotel when the BART service was cut in half.

“We had a lot of SF General nurses. Everyone who has come a long way has stayed with us. We didn’t feel like we were in a hotel, we felt like we were in a small building. You have known the people very well. We gave them bags to take away for dinner.

The hotel reopened to tourists in August 2020 but was forced to close again in January after travel restrictions pushed occupancy rates down to single digits. The bar is now open, although the regular pianist, group nights and Sunday brunch are still on hold. Boelens says his goal is to restart Sunday brunch by Fleet Week in October, so guests can get a great view of the Blue Angels.

“I can’t wait to bring it all back,” Boelens said. “It brings a lot of life.”

While we are talking, the waiter Jose Cervano brings us drinks and napkins with a smile. Cervano has served clients on the 19th floor since 1975. “The staff are ready, happy to be back,” says Boelens.

Perhaps the best way to see the Mark is before sunset, after a stroll around Huntington Square. The historic block and the bar seem to be of a pair, and from another era. Formerly the site of the Thief Barons’ wedding cake mansions that collapsed in 1906 (with the exception of the Flood Mansion, which somehow survived the fire), the place is now an oasis of just tranquility. above the bustling city.

A good place to start is the golden “Gates of Heaven” of Grace Cathedral. At the bottom of the steps, the diocese marks the former site of a 40-foot-high “fence of wickedness” built by a furious Charles Crocker. Huntington Park fills the footprint once occupied by the mansion of another railroad magnate, Collis Huntington, and is centered around the curious ‘Turtle Fountain’. The Brocklebank Apartments on the corner of Mason and Sacramento are perhaps more recognizable as where James Stewart began his excruciatingly slow car chase in “Vertigo,” and also hosted San Francisco columnist Herb Caen.

The fortress-like James C. Flood mansion, now home to perhaps California’s most elite club, the Pacific-Union Club, sits opposite the flags of the Fairmont Hotel where Tony Bennett sang for the first time “I Left My Heart in San Francisco” (and most recently famous for Sean Connery throwing an FBI agent off the roof in “The Rock”).

From there, across the California Street cable car tracks, is the Top of the Mark elevator.

“You can be on the hill and be fully entertained for a whole day,” says Boelens. “Many other places in San Francisco have been around this long, but they’re not at the top of Nob Hill. It has not been retouched here.

The bar is still frequented today by people in uniform, among a mishmash of tourists and business guests. And no bar in San Francisco, or perhaps anywhere else, can have so many famous visitors. Boelens tells me that over the years everyone from Elvis Presley to Michael Jackson to Barack Obama and the Dalai Lama have enjoyed the sight.

Until the 90s, windows encircled the entire room with an old circular bar in the middle. The bar has been moved to the corner so that the central space can be used for dance and banquet events, meaning the wall facing Pine Street is now windowless.

On my way back to the elevator, host Brian Hamilton leads me to the glass cabinet containing the squadron’s bottles and tells me that the wartime tradition is still going strong. A recent note on a bottle of veteran’s gin pays tribute to those who died in the terrorist attack on Kabul in August. Hamilton opens the case and hands me a green bottle with a note on it.

“An older man asked to add this to our collection last week,” he says. “He was not a war veteran, but he survived the Holocaust. He is almost 100 years old.

The combination of heartbreak and good humor on the handwritten note embodies the timeless design of the bar.

“As a Holocaust survivor, I am very grateful to all the military men and women who served in WWII. Enjoy this bottle of tequila.”